First released on mobile in 2012, Level Eight have brought their stealth/heist game, Robbery Bob to Steam. Have any improvements to the original been made, or is it a simple port?

Before getting into a review of the PC version of Robbery Bob: Man of Steal, let’s take a look at the specifics of the Steam launch. It appeared on the Steam storefront on the 21st October 2015 without much of a fuss.

Looking at SteamSpy, there are a few things we can see about its performance. Firstly, it hasn’t sold tremendously well – its currently owned by an estimated 1,500 people. The owners chart (which you can see on the right of the page linked above) shows something else that’s interesting – how much refunds can have an effect on games.

With Robbery Bob: Man of Steal, you can see that the number of owners fluctuates. Within a matter of two days, the game went from having an estimated 2,500 all the way down to the current estimate of 1,500.

From my experience, SteamSpy is rarely 100% accurate, however, it is nearly always accurate enough when it comes to the bigger picture and ownership trends. So if it says that a game has lost owners, then it’s normally correct.

What we can read into this performance, then, is that a lot of people that buy Robbery Bob: Man of Steal aren’t massively impressed by what they’re given – which is something that doesn’t surprise me given the nature of this port (more to come on that) and the quality of the game in general. Perhaps most telling of all, SteamSpy suggests that only one player was playing the game yesterday. Again, this number isn’t going to be guaranteed accurate, but it’s not going to be more than a few people out. I was playing it yesterday. I wonder if anyone else was?

Not the guys who work on cars, no, rather the nuts and bolts of the game. There is a meek attempt at story in Robbery Bob: Man of Steal – but it’s little more than windows dressing. This isn’t a problem for me, as long as the game’s mechanics make up for it.

The primary mechanic here is stealth. Attempting to become one with the shadows (and occasionally plant pots, statues and other Bob-sized objects), you have to sneak into property, steal valuable items and get out again without being spotted or heard.

The game starts off promisingly. The art style is clean and uncluttered, making it easy to take a quick glance at the layout of a building and figure out where you need to be. The guards, homeowners and other potential victims have their eye-line and routes marked out for you, which probably makes the game a little too easy at times.

Bob is a One-Trick Pony

While there are a couple of ways to sneak past patrolling NPCs, such as opening doors to cause a distraction and being able to hide in certain objects, the game doesn’t offer enough variation in order to remain entertaining.

It’s like a puzzle game that only offers slightly different variations on the same puzzle. Think of it as a word search book that only gets slightly harder as you make your way through the first puzzle to the last.

It’s not the mechanics that are disappointing – they’re actually competently executed – it’s just that the level design is lacklustre. In the end that means you end up playing level after level that look far too similar, with valuable items spread out in similar patterns. To go back to the earlier analogy, it’s like doing word search after word search where the words you have to find are always the same length in the same sized grid – just with different letters.

The end result here is a game that feels fun to play for the first five minutes, and then quickly goes into a nosedive of tedium that it never manages to pull out of.

Something’s Not Quite Right

The other major issue I have with Robbery Bob: Man of Steal is that I didn’t feel like I was ever getting any better at the game. This ties in with the feeling that the game has such a tame difficulty curve. A dozen levels in hardly feels different from the first, and I can pass one level first time while failing several times at the next one – only to then pass the one after that on my first attempt again. Heck, I even went back to an earlier level and failed that a few times just because of how the items happened to spawn.

This becomes a bigger issue when you do get toward the end of the game and the levels have actually gotten noticeably harder – finally. Now there are a lot of NPCs and traps to avoid and luck in item placements and NPC positions becomes a bigger factor than your skill.

In the end, Robbery Bob: Man of Steal really feels like that word search puzzle book I’m apparently so fond of. It feels like someone sat down, designed a ton of puzzles with a pencil and paper, and then applied the robbery/heist theme as a coat of paint. In the end it lacks character – the game would feel exactly the same if it were rendered as outlines and dots.

Less levels and a sharper difficulty curve would have gone a long way to making my time with the game more enjoyable.

A Word on Controls

Robbery Bob: Man of Steal has controller support. What’s more, it improves on the touch controls found in the mobile version, which is a major relief. It actually makes this version of Robbery Bob the best available on any platform.

The potential of the first two minutes of Robbery Bob: Man of Stealwere sadly never realised. In the end, it’s a game that has too many levels that are far too similar and a handful of competent mechanics that aren’t interesting enough to keep the long slog through the levels interesting. Forget heist of the century, for me, Robbery Bob: Man of Steal isn’t even the heist of the day. 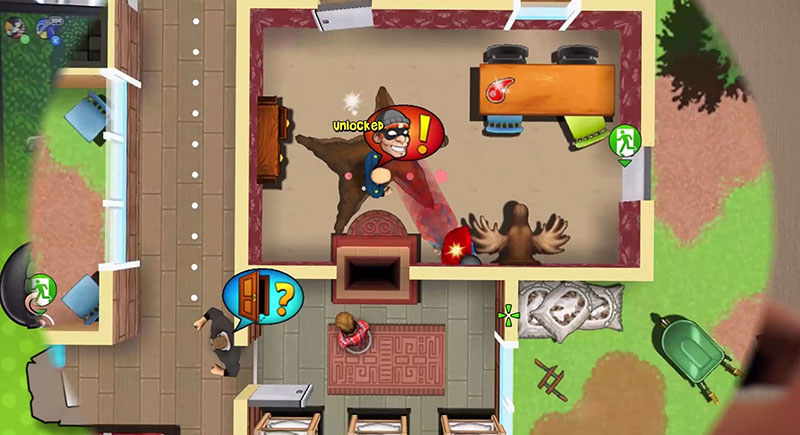