Robbery Bob was a bit of a let down. In the first few minutes it seemed like a great idea with decent gameplay. Sadly, it never really took off after the initially promising early experience. In my review, I said that the developer needed to pay more attention to how the mechanics develop as players progress. Have they made any improvements for Robbery Bob 2: Double Trouble?

Bob is a thief. We already know this. He’s on the run and he’s attempting to escape through a poor couple’s wedding. Unfortunately for Bob, the bride is the daughter of a Mafia boss. Rather than being put to bed with aquatic specimens, Bob is hired by the Mafia boss so he can pay his debt.

The rest of the story doesn’t really go anywhere from there, you’re simply sent around as an errand boy – or robber in this case – and the cost of your initial trespass seems ridiculously high!

Sadly, not a great deal. The new story is a bit more exciting and silly than the first, although whether that’s really a positive is arguable at best. There haven’t been any major changes to the mechanics, which is still pure stealth and the game’s strongest suit.

This is what makes Robbery Bob and Robbery Bob 2 so frustrating. The idea behind the stealth mechanic and the way that the game doesn’t give you an easy out with being able to fight means that it can be a real challenge. The levels are like dynamic mazes – much as they were in the first game – and there’s absolutely a market for that type of game that is far from being tapped.

What Holds It Back?

Sadly, there are still a number of issues that stop Robbery Bob 2: Double Trouble from reaching its potential. The graphics this time around are not exactly pleasant. They have a harsh and rough feel to them – although the design of the buildings and clear layouts are still on point. It’s just everything else that feels like an unnecessary level of low resolution clutter.

The controls are still awkward. The virtual joystick is not good for games that require precise controls – and this is one of those games. Not only does it take a lot of practice to get used to, but it’s also not exactly responsive either – Bob will often keep walking for nearly a second after you’ve stopped pressing forward, which makes timing dashes and hiding in objects a real pain and a frustrating experience.

Perhaps most frustrating of all is that the level design feels exactly as it did in the first game – like the developer came up with a set of puzzles in no particular order and with no particular idea of progression in mind. Objectives are still scattered hap-hazardly around the levels and there are some really strange spikes and troughs in difficulty.

There’s this feeling of disorganisation around Robbery Bob 2, almost like three ideas crammed together – gameplay, the look and controls – that don’t at any point appear suitable for one another.

Design decisions like that make me question the level of passion behind the development of a game. If you really care about your stealth-heavy game, why would you force such an unwieldy control scheme on it? Why would you not fix the unresponsiveness of the controls that’s present in both games?

Why would you then force an aesthetic on a game that looks part generic and part messy? It’s almost like the game was designed piecemeal by different people and forced together at the end.

Despite the criticisms, the stealth play – when it works and responds – is really, really deep. I’d venture to say they there isn’t a more complex stealth only game on mobile.

It’s not even free (yet), so if you’re interested in the series try the first game out rather than spending money on this one.

It’s still a frustrating miss for me, though. 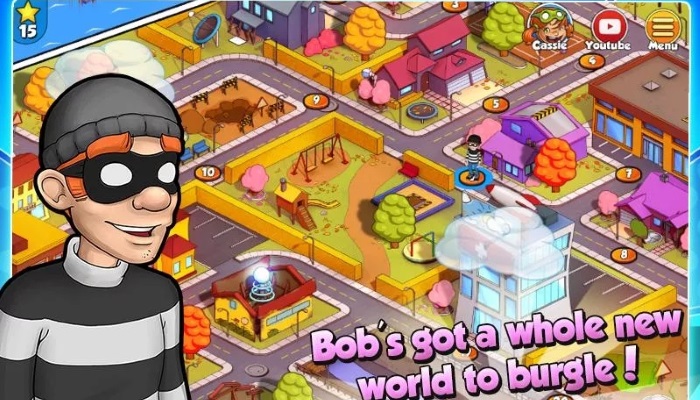